Currently in Melbourne many middle ring suburbs have community campaigns calling for reinstatement of government school provision. The suburbs include – Richmond, Kingsville-Yarraville-Seddon, Oakleigh, Coburg, Prahran and a campaign for two schools for Port Phillip.

A graph made using the Property Council’s new tool, Our Nation, shows just how many new class rooms will be needed in Melbourne to cope with projected increased numbers by 2021 – enough to make any State Government treasurer blanch. The suburbs needing schools now are generally those which have experienced school closures followed by increased numbers of school aged children as a result of increased births, suburb life cycle and an influx of first home buyers and young families moving a bit further out from the inner city. 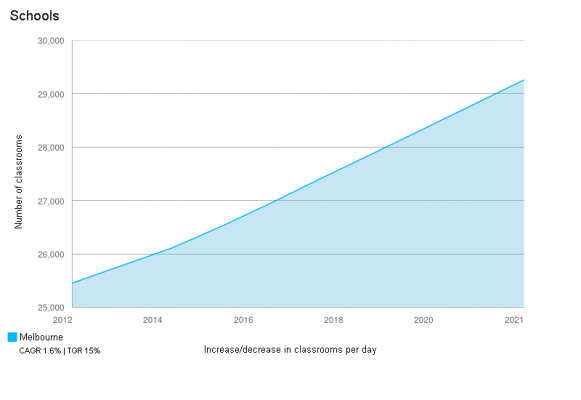 Along with the above population factors some middle ring suburbs are experiencing urban renewal with plans and capacity for more. A recent Property Council Report Making the Numbers Stack Up: a study into major residential urban renewal in Melbourne has highlighted Coburg as being the only suburb in the top 20 for numbers of all three new housing types.


Coburg Hill – the redevelopment of the old Kodak site is coming along nicely and was launched by State Government big guns like the Premier and Planning Minister.In a recent Moreland Leader article, the Moreland Council CEO Peter Brown said of the Coburg Initiative urban renewal project -“All the fundamentals are there. Even when we talk to the State Government they say of all the urban redevelopments around Melbourne this is probably as good as you’re going to get”.

HSC argue, with full council support, that the one fundamental missing is a high school which is essential for the economic viability of urban renewal in this designated activity area. If the State government back urban renewal in our area they should also back the provision of essential social infrastructure. Local school provision not only benefits economic development it is positive for community development, social development, well being, health and the environment. Of all morning peak hour car trips, 17% are parents taking children to school according to a recent report from the Vic Parliamentary Enquiry into Environmental Design and Public Health and the cost of congestion is set to double by 2010. HSC say planning for local school provision which enables active transport is the solution.

Recently the Minister for Education Hon Martin Dixon said on ABC radio that of all the areas in Melbourne needing a school Coburg is the most progressed. Since September 2008 Community advocacy group High School for Coburg (HSC) has been calling for the reinstatement of junior secondary provision in Coburg. HSC’s own report More Local Primary School – Fewer Secondary Options  shows very big increases in primary school enrolments in the area, for example a 50% increase Prep enrolments in the four years to 2012.

HSC await the census data with interest as one anomaly they cite is the low growth in numbers for primary school aged children in id forecast projections for Coburg North for instance compared with the actual primary enrolment increases at the local schools. Cate from HSC wonders if this is because it is hard to capture families who migrate into suburbs with children as they aren’t picked up in birth data for the area. 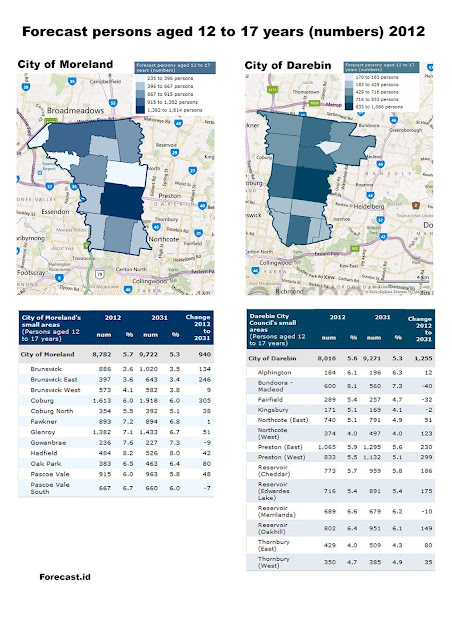 The group has put together this data map using the id website which shows the most secondary school aged persons in Darebin and Moreland are in Preston and Coburg –suburbs which do not have any Years 7-9 co-ed school provision. Two state governments have commissioned two demographic reports by consultants Spatial Vision on a study area roughly equating with the Moreland plus Darebin municipalities.
The 2012 report, with the added benefit of Darebin Council now being on board with id forecast showed even bigger projections than the 2010 report and found an immediate shortfall in spaces for years 7 to 9.

The Education Minister has this report and DEECD recommendations before him now and is expected to make a decision in the near future.

HSC say it would be a good idea for the Planning Minister to have a chat with him.

Cross posted on the .idblog here.